A Book and a Chat with Raymond Khoury 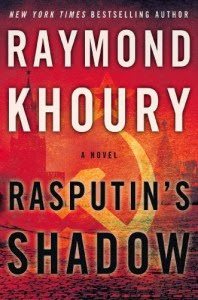 When it comes down to it some of my favorite reading is with authors like Steve Berry, adventure type books, with a bit of history perhaps thrown in, something to get your teeth into so to speak. My guest today is another such author screen writer and New York Times bestselling novelist Raymond Khoury.

Raymond went from a career as an architect to becoming one of the most popular historical action adventure authors as well as a screen play writer of note.

As we learned from the show, Raymond’s trip through the literary jungle was not without mishap… He actually thought he’d made it big as a screen play writer before his success as a novelist when his adaptation of Melvin Bragg’s novel The Maid of Buttermere was picked up by none other than Robert De Niro who announced in the Variety that he would be producing the movie and playing the lead role. Unfortunately nothing more came of that screen play however it did lead to the production “The Last Templar” originally written as a screen play, Raymond was persuaded to adapt it into a novel.

The rest as they say is history. It soon became a New York Times Bestseller, spending 11 weeks on the hardcover fiction list, and a Number 1 bestseller overseas. It has been translated into thirty-eight languages and published in over forty countries. It was also the book where we first met FBI agent Sean Reilly.

This success was soon followed by “The Sanctuary” and “The Sign” before Sean Reilly re-appeared in “The Templar Salvation, a sequel to The Last Templar and “The Devil’s Elixir”.  Now Sean Reilly returns in what will surely another smash hit novel “Rasputin’s Shadow”.

On a cold, bleak day in 1916, a mining pit in Siberia turns into a bloodbath when its miners attack each other, savagely and ferociously. Minutes later, two men - a horrified scientist and Grigory Rasputin, trusted confidant of the tsar - hit a detonator, blowing up the mine to conceal all evidence of the carnage.

In the present day, FBI agent Sean Reilly is tasked with a new, disturbing case. A Russian embassy attaché seems to have committed suicide by jumping out of a fourth-floor window in Queens. The apartment's owners, a retired high school teacher and his wife, have gone missing, while a faceless killer is roaming New York City, leaving a trail of death in his wake.

Joined by Russian FSB agent Larisa Tchoumitcheva, Reilly's investigation into the old man's identity will uncover a deadly search for a mysterious device whose origins reach back in time to the darkest days of the Cold War and to Imperial Russia and which, in the wrong hands, could have a devastating impact on the modern world.

As the Library Journal described the book…

With further books already in the pipeline the name Raymond Khoury will continue to be must read and be found on book shelves everywhere.

So listen now and share an interesting, and entertaining show as I chat with my special guest today on A Book and a Chat with Raymond Khoury

You can find out more about my guest and their books at:
">"Raymond Khoury - Rasputin's Shadow"