A Book and a Chat with Douglas E. Richards 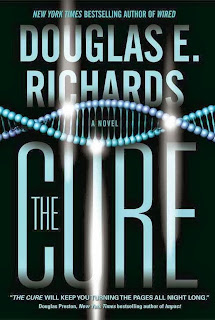 Today’s guest is Douglas E. Richards New York Times and USA Today bestselling author of WIRED, its sequel, AMPED, THE CURE, and six critically acclaimed middle-grade adventures enjoyed by kids and adults alike. He has been widely praised for his ability to weave action, suspense, and science into riveting novels that brilliantly straddle the thriller and science fiction genres.

Leaving a career as a biotech executive (he even has a virus named after him) Douglas started his writing journey with a middle-grade/YA science fiction trilogy “The Prometheus Project". While written for that age group the series has been critically acclaimed by kids and adults alike.

Wanting to branch into the Thriller market one day Douglas launched his story “Wired” as an E-Book, the rest as they say is history. Almost overnight Wired took off, throwing him into the New York Times and USA Today best sellers list and bringing his name and his talent to thousands of readers. This early success was followed by “Amped” which enforced the name Douglas E. Richards in the thriller world.

About “The Cure”:  (taken from the authors web site)

Erin Palmer had a devastating encounter with a psychopath as a child. Now a grad student and scientist, she's devoting her life to studying these monsters. When her research catches the attention of Hugh Raborn, a brilliant neuroscientist who claims to have isolated the genes responsible for psychopathic behavior, Erin realizes it may be possible to reverse the condition, restoring souls to psychopaths. But to do so, she'll not only have to operate outside the law, but violate her most cherished ethical principles.

As Erin becomes further involved with Raborn, she begins to suspect that he harbors dark secrets. Is he working for the good of society? Or is he intent on bringing humanity to its knees?

Hunted by powerful, shadowy forces, Erin teams up with another mysterious man, Kyle Hansen, to uncover the truth. The pair soon find themselves pawns in a global conspiracy--one capable of destroying everything Erin holds dear. And forever altering the course of human history . . .

At a time when society seems to be facing an epidemic of psychopathic monsters, The Cure explores this condition, and the surprisingly thorny ethical and moral dilemmas surrounding it, within an explosive, thought-provoking, roller-coaster-ride of a thriller that will have readers turning pages deep into the night.

"The Cure will keep you turning the pages all night long."

Douglas has not forgotten his Science Fiction and books for younger readers either; novels like “Out of This World”, “The Devils Sword” and “Ethan Pritcher, Body Switcher” have also been produced by this talented author.


So listen now and share an interesting, and entertaining show as I chat with my special guest today on A Book and a Chat with Douglas E. Richards

Direct link to the show
A Book and a Chat with Douglas E. Richards

or you can download the mp3 file of the show from
"Douglas E. Richards"

You can find out more about my guest and their books at:
"Douglas E. Richards - The Cure"