A Book and a Chat with Michael Hebler 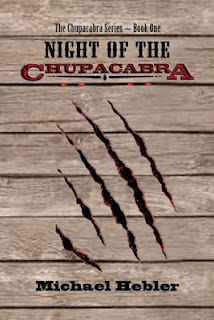 I often say that one of the great things about doing over 550 shows is that you are always learning new things, and during my show with Michael Hebler I learnt yet another new thing.

Michael Hebler has followed a career more in film and publicity using this knowledge to create several novels.

His first was “The Night After Christmas” a wonderful follow-up to the classic “Night Before Christmas”. The book is the delightful tale of what happens the night after Christmas. Haven’t you ever wondered what happens to Santa, Rudolph and all the other reindeer after their busy night of spreading joy around the world?

Michael's ability to tap into the young child in all of us is delightful and refreshing. The illustrations whisk you away to a magical fairyland of yesteryear. I look forward to reading more from this talented author.

After this early success Michael has set about creating a series of books based on the “Chupacabra” which I had to learn about. For those like myself that it rings a vague bell with it’s sort of a Latin American bogie man, that first appeared in the 1990’s.

It is a creature that lurks in the vast open deserts of the west. It can only survive on blood and, although it prefers to prey on the weak and young, it will slaughter anyone or anything, once provoked. It is unnatural, deceptive, and difficult to kill. Word about the existence of this elusive beast has not spread since anyone who has crossed paths with it did not live long enough to tell of their account.

“Night of the Chupacabra” is one man’s journey to reunite with his missing family, while the lethal creature that separated them, the mysterious and ravenous chupacabra, is never far behind. Night of the Chupacabra is not only a gruesome regale of carnage, but a unique combination of science fiction bloodshed with a more poignant tale of lost love set against a Western backdrop.

With already several more in the series underway I am sure we’ll hear a lot more of Michael Hebler and the “Chupacabra”.


So listen now and share an interesting, and entertaining show as I chat with my special guest today on A Book and a Chat with Michael Hebler

You can find out more about my guest and their books at:
"Michael Hebler - Night of the Chupacabra"

Email ThisBlogThis!Share to TwitterShare to FacebookShare to Pinterest
Labels: Book and a Chat, Hunt for the Chupacabra, ichael Hebler, Night of the Chupacabra, The Night After Christmas, thriller, western