A Book and a Chat with Missy Wolfe 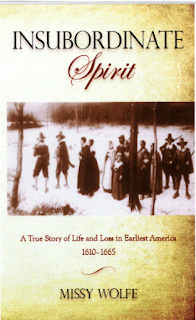 One of the wonderful things about hosting a radio show is that you never stop learning from the shows. Today’s show with Missy Wolfe is one that I learned many new things about America and its history.

Missy’s book “Insubordinate Spirit: A True Story of Life and Loss In Earliest America, 1610-1665" , not only educates one into subjects that many in America will never even have heard of but tells a true story that would put many a soap opera to shame.

The book took seven years of research during which time Missy turned up much unknown or forgotten pieces of American history, from the fact that Greenwich was the border between New England and New Holland to a forgotten Indian tribe whose name seems to have skipped the history books.

The book is a true story of Elizabeth Fones Winthrop Feake Hallett, one of the first settlers in 17th Century America, and niece, then daughter-in-law, of Puritan leader John Winthrop, whose band of English immigrants started the Massachusetts Bay Colony in 1630.

Elizabeth’s first husband died his first day in America and her second went insane. Denied permission to marry her third, she lived with him regardless and faced a death sentence for it. Leaving the safety of Boston’s Bay Colony, she settled on the untamed border between New England and New Netherland that is now Connecticut near Manhattan. She faced threats here as well from soldiers defending Dutch jurisdiction and angry Munsees who detested her European presence.

An imperfect new American, she watched as the Dutch launched what  may have been the largest massacre of the Indians in the northeast from her West India Company property in Old Greenwich. Moving more deeply into New Netherland to save herself from Indian retaliation and her own still-threatening English, she became part of New Netherland’s Dutch society and did pay the price of continued Indian anger. Surviving the turmoil of three colliding cultures, she sought a better engagement with God, if not man, and successfully championed a transformative new religion. Punished for this too, she embodied an emerging new American persona, one that rejected an unworkable past and embraced a future that nurtured the spirit of her intrepid life.

There is way to much to explain about in this blog, it is one of the most fascinating true stories I have had on my 500 plus radio shows and one I highly recommend. Listen to the show and see what you think.

So listen now and share an interesting, and entertaining show as I chat with my special guest today on A Book and a Chat with Missy Wolfe

You can find out more about my guest and their books at:
"Missy Wolfe - Insubordinate Spirit"