A Book and a Chat with Jame Richards 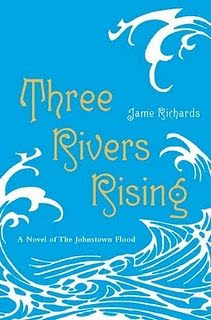 I was due to have today’s guest on my show previously but it had to be cancelled at the last moment, so I was very pleased to be able to have Jame Richards back as a guest on my show today. We were not let down, and learned much about my guest and her debut book “Three Rivers Rising”.

Jame was the winner of the PEN New England Children's Book Caucus 2008 Susan P. Bloom Discovery Award and nominated for the ALA Best Fiction for Young Adults 2011 list.

It seems others knew Jame was destined to be a writer before she herself did, as growing up she was the one always chosen to do the narration. Her early artistic endeavors were aimed more towards visual arts, until adults told her there was no market for pencil-on-paper drawings, and even less for crayon-on-coloring-book pages, though she would have been a dab hand at designing pajamas. If not that in another little tidbit that Jame shared with us, naming nail varnish or lipstick colors.

But it is a whole lot more.

The book written in a lyrical sometimes poetic format that floats the reader along through a story you never stop wanting to read.

So what about “Three Rivers Rising” ?

It is set in the late 1800s when railroads were connecting disparate regions of the U.S. and demand for steel was high.

Sixteen-year-old Celestia spends every summer with her family at the elite resort at Lake Conemaugh, a shimmering Allegheny Mountain reservoir held in place by an earthen dam. Tired of the society crowd, Celestia prefers to swim and fish with Peter, the hotel’s hired boy. It’s a friendship she must keep secret, and when companionship turns to romance, it’s a love that could get Celestia disowned. These affairs of the heart become all the more wrenching on a single, tragic day in May, 1889.

After days of heavy rain, the dam fails, unleashing 20 million tons of water onto Johnstown, Pennsylvania, in the valley below. The town where Peter lives with his father. The town where Celestia has just arrived to join him.

This searing novel in poems explores a cross-class romance—and a tragic event in U.S. history where over 2000 people lost their lives.

The show was full of interest and advice, as well as a brief insite into what Jame is currently writing.

You can find out more about my guest and their book at:
"Jame Richards - Three Rivers Rising"