A Book and a Chat with "Leonard Rosmarin" 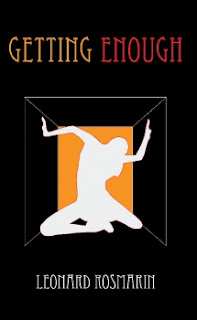 Growing up we often watched on the good old BBC, what became known as a "Whitehall Farce" along the lines of "No Sex Please We're British".

One of the main stars of these shows which filled London theaters being the late Brian Rix.

The shows normally ended up with the stars trousers round his ankles, a dead female in his bed and his wife/mother/girlfriend walking in on him.

"Getting Enough" the novel of my guest on today's show "Leonard Rosmarin" would not be out of place with these bastions of English theater.


Started way back in 1982, once Leonard retired from being university professor for over forty years, he had no excuses but to finish what he started all those years before. Time though it seemed changed his views and what once was intended to make fun of his relatives, with some sex and a good story line changed into much more. The characters lead Leonard along a path where he started to feel a deep empathy towards them. As he explains... "Laughing with them rather than at them."

Leonard has published nine books on various aspects of French literature, presented hundreds of papers at learned conferences and has written many articles. The French Government has also decorated him twice for exceptional service in the cause of French letters. He feels as though he’s been writing all his life and writes fiction to see more clearly into himself and the human condition.

During the show we found out much about this author and his book, sharing his humor and his views.

Direct Link:
"A Book and a Chat with Leonard Rosmarin"

You can find out more about Leonard and his books at:
"Leonard Rosmarin - Getting Enough"