A Book and a Chat with "Jack Gresham" 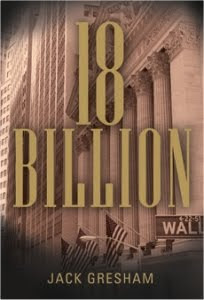 While some people just about manage to fill their lives with one career, my guest on today's show has managed three, and that is "so far". Jack Gresham, has been a pilot in the United States Air Force, orthopedic surgeon, and now successful author of his the first novel in a set of four called "18 Billion".

From flying F86D's out of Maguire Air Force Base in new Jersey, to setting up a western style orthopedic surgery/rehabilitation dept in Saudi Arabia, and touring most of the world Jack has been there seen it and got the tee-shirt. His knowledge of the people and locations have helped Jack create this exciting and enjoyable novel.

"18 Billion" is the first book in the "Mohammed of Babylon" series a set of four books, the second being "A Tree in the Desert". The story develops through the first book leaving people clamoring for the follow up, and it's good to know the complete series has been written and is ready to fill the craving for those who love 18 Billion.

During the show Jack shares with us much about this life, traveling, and how the book developed. Intriguing incites as to the development not only of the book and series but how the story was helped by his own knowledge and beliefs.

Direct Link:
"A Book and a Chat with Jack Gresham"

You can find out more about Hope and his books at:
"Jack Gresham - 18 Billion"

Email ThisBlogThis!Share to TwitterShare to FacebookShare to Pinterest
Labels: 18 Billion, A Book and a Chat, Barry Eva, Jack Gresham, Mohammed of Babylon, Storyheart, terrorist, thriller, Tree in the Desert