A Book and a Chat with "Frank F Fiore" 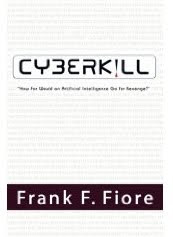 If like myself you like the type of adventure novels written by Clive Cussler and Tom Clancy then my guest on tonight,s show has a book for you. Frank F. Fiore is a best selling author of over 50,000 copies of his non-fiction books. Now Frank has turned his talents to action-adventure novel "CyberKill".

Frank shared with us during the show that the actual writing and editing of the book has taken around ten years as Frank has honed his writing skill to produce this "must read" finished article.

Indeed as Frank explained, some of the items which might have been a bit hard to believe as possible ten years ago, are now actually available and used in warfare and espionage.

Frank explained his writing process and how his transition from non-fiction writer to fiction author has taken place. How from the book being a POD (print on demand) book, has now been picked up by TrapDoor Books, where not only are they using modern networking skills, but also have the book out as free-to-play Flash Game where it has just hit 50,000 players, with an 18% click through rate. (http://www.flashpromo.com/games/cyberkill)

Frank went on to let us know the three book series he is currently working on "The Chronicle's of Jeremy Nash" as well as the the book he stills wants to produce.

The show proved to be both interesting and entertaining, so why not tune in now or download the file to listen to another time, to "A Book and a Chat with Frank F Fiore"

Direct Link:
A Book and a Chat with Frank F. Fiore

A new follower. You can also follow me at www.safehomehappymom.com