A Book and a Chat with "Cynthia Vespia" 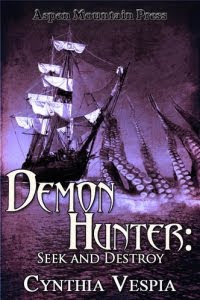 Tonight's special guest on "A Book and a Chat" is author Cynthia Vespia, writer, author, weapons collector and self confessed chocoholic.

Cynthia is one of those people who knew she wanted to write from an early age, and after leaving high school, he established a successful career as a freelance journalist writing everything from features and fillers, to reviews and human interest stories. Though all the time writing novels remained her first love.

Her first book was an historical novel called "The Crescent" was published in 2005, a story revolving around the not that well known female roman gladiators> As we hear during the radio show, this book is currently under discussion for making into a film... so look out for that.

After producing her second novel in 2006 a suspense thriller based around the world of wrestling called "Theater of Pain", Cynthia embarked on her biggest project yet.

Demon Hunter labeled "A Trilogy of fear" the kind of fiction that will compel you to sleep with your lights on.

Book one "The Chosen One" proved a great success with many reviews, comments and interviews. The second book of the trilogy "Seek and Destroy" was released in November 2009. It has already created stir not only amongst those who read the first book, but bringing in a fresh audience.

As Cynthia describes the books...

"We can all find ourselves secretly wishing for a certain aspect of our lives to change but sometimes you get your wish and it winds up not being worth it, or not what you thought it would be. And sometimes it IS what you were looking for…but things don’t always come easily or run smoothly."

Why not listen to this fascinating and enjoyable thirty minutes as Cynthia Vespia is my special guest on today's "A Book and a Chat with Cynthia Vespia" at this link.

To find out more about Cynthia and her books visit