A Book and a Chat with Allan Topol 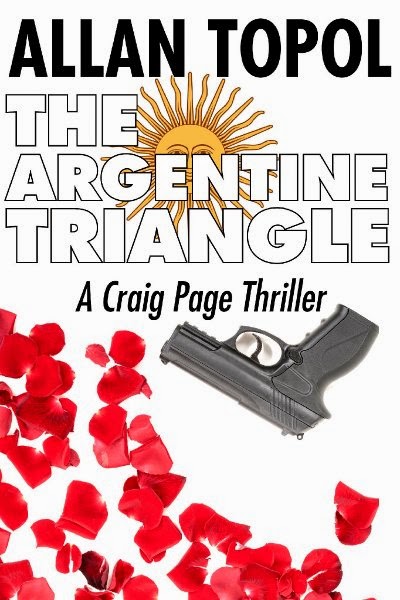 I am glad to have on "A Book and a Chat" the return of international best selling thriller writer Allan Topol to chat his tenth book the latest his Craig Page thriller "The Argentine Triangle".

Hero Craig Page previously appeared on the trilogy , the third and final book in trilogy that includes “The Spanish Revenge", “The China Gambit”, "The Russian Endgame".

Now Allan Toplol one of the best thriller writers of today is back with The Argentine Triangle" another must read for all lovers of thrillers.

A lawyer of some not, Allan has used his legal and military knowledge along with locations he has visited in his much traveled life to produce a stream of books that have readers eagerly awaiting his next page turning thriller.

Currently, plans are in the works to make three of the earlier novels “SPY DANCE”, “A WOMAN OF VALOR”, and “DARK AMBITION” to be made into movies. As we learned a screenwriter has already been hired by a producer to write a screenplay for SPY DANCE, and it is nearing completion.--

About “The Argentine Triangle”: (taken from Amazon)


After a fall from grace and drastic cosmetic surgery in Switzerland, former CIA director Craig Page is enjoying a new, exhilarating life racing cars across Europe. But when new dangers threaten America and an old friend goes missing during a covert mission in Argentina, will Craig be ready to step up to the plate?

Undercover in the glamorous world of Buenos Aires' wealthy elite, Page finds himself on the brink of a terrible discovery. General Estrada and Colonel Schiller have plans for Argentina, but that's only the tip of the iceberg. A world of brutality hidden in the classified secrets of Argentina's Dirty War comes to light, painting an image of the cataclysmic future awaiting Estrada's South America. To expose Estrada and put an end to his plot, Page is forced to implement every instinct, skill, and tool in his arsenal. But when it comes time to close in for the kill, Page meets with unexpected complications-love, lust, and a lethal game of cat and mouse.

Hard on the heels of The Russian Endgame comes Allan Topol's next great thriller.

Rife with the exotic backdrops and hairpin plot turns that put Topol on the best-seller list, The Argentine Triangle is a heart-stopping foray into human vice coupled with power accelerating towards catastrophe.

As the review says...In a world fraught with global conspiracy, Craig Page is king. So check it out!

You can find out more about my guest and their books at:
"Allan Topol - The Argentine Triangle"