A Book and a Chat with Todd Brockdorf 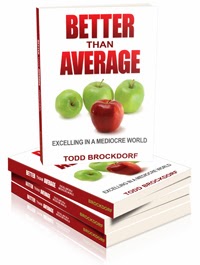 “A Book and a Chat” starts off 2014 with Todd Brockdorf as my guest.

Todd Brockdorf is NOT an astronaut, a professional athlete, or a reality TV star (yet), he simply is a regular guy who discovered how to excel beyond the ordinary and find what moves him in life.

While in college, Todd thought he knew everything about running a student organization. Was he ever wrong! After his Executive Board nearly resigned, he learned important lessons in leadership, effectively communicating his vision, and building a change-ready organization. One year later, membership had increased about 300%. Todd was taking the first steps in learning about being “better than average”.

After years of studying companies and life, Todd now the best-selling author of Better than Average: Excelling in a Mediocre World, he is a frequent speaker leading programs and training for corporations, non-profit associations, and colleges and universities who want to be Better than Average in order to stand out from the crowd.

About “Better than Average”: (taken from authors web site)

Better than Average: Excelling in a Mediocre World is a business book by Todd Brockdorf designed for professionals who want to stand out from the crowd.

Leave that old concept of growing up, getting an education, and obtaining a steady job behind. That’s Average. If you’ve ever dreamed of wanting more, desired to stand out from the crowd, or wanted to reach a higher level of your potential, Better than Average is your guide.

This step-by-step road-map to your Better than Average lifestyle, leadership, and company teaches:

While there have been many authors in the Self Help / Personal Improvement category on the show, most of them either relate to business management, or share steps that are in many ways beyond the normal reader.  This book provides a  clear explanation of his concepts, peppered with humor and specific examples from the authors own  experience that can relate to all aspects of life as well as being helpful for all ages.

So listen now and share an interesting, and entertaining show as I chat with my special guest today on A Book and a Chat with Todd Brockdorf

You can find out more about my guest and their books at:
"Todd Brockdorf - Better Than Average"

Email ThisBlogThis!Share to TwitterShare to FacebookShare to Pinterest
Labels: A Book and a Chat, Barry Eva, Better than Average, Education, Excelling in a Mediocre World, Life, Personal Improvement, Self help, to distinguish yourself from the crowd, Todd Brockdorf