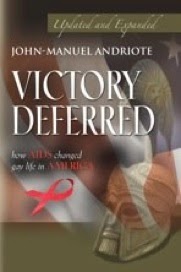 Today’s guest on “A Book and a Chat” is John-Manuel Andriote,  he is an author, journalist and speaker focused on cultural trends, politics, health and medicine, LGBT issues, specializing in reporting on HIV/AIDS.

John was working on his masters degree in journalism at university in 1985 when he learned two of his friends like John  in their twenties had died of AIDS.

While the news headlines went on about the growing  plague John himself chronicled the efforts of America’s gay community to care for those already sick and help others prevent becoming infected with HIV, at the same time battling for equality as American citizens.

For the next 20 years John wrote for many publications including working as senior editor for Family Health International HIV/AIDS technical assistance program.

John is now a noted historian of the AIDS epidemic with his own unique personal story.

His book "Victory Deferred" won the 2000Lambda Literary Awards "Editors' Choice" award. It was named an "honored book" by the American Library Association and a finalist in its gay/lesbian nonfiction awards.

Mix with that, his book "Hot Stuff: A Brief History of Disco" and a history of Washington, DC’s "Metropolitan Club" and you can see what a talented author John-Manuel Andriote.

Now John is turning his talents to another area with his first children's book, "Wilhelmina Goes Wandering", which will be published in April of this year. Based on the true story  from my own neck of the woods her in Connecticut  about a runaway cow that became a cult hero and illustrated by Vermont-based artist Katie Runde.

Journalist and author John-Manuel Andriote teams with artist, musician and dairy farmhand Katie Runde to re-imaging the true story of Wilhelmina, the Black Angus cow who decided one hot July day in 2011 to run away from her farm in Orange, Connecticut.

For five months, Wilhelmina hangs out and travels with a herd of deer. Daisy the doe becomes her best friend. They’re seen around Orange, Milford, and West Haven. For some reason, animal control officials believe Wilhelmina is a bull, and refer to her as Waldo. Until, that is, the first of their unsuccessful efforts to capture her.

When the humans appeal to her sweet tooth and finally succeed in tranquilizing the eight-hundred-pound bovine, they move her to an animal sanctuary twenty miles away in Oxford, Connecticut. They expect Wilhelmina will be happy there for the rest of her life.

It turns out that’s the only thing they were right about. Betty, the gentle farmer who adopts Wilhelmina, accepts her because the old Scottish lady shares Wilhelmina’s sense of adventure. As Wilhelmina comes to understand, acceptance and love can cure wanderlust and let you know you’re home at last.

With a follow up book about one of the other characters in the book already being planned the success of John-Manuel Andriote is set to continue.

So listen now and share an interesting, and entertaining show as I chat with my special guest today on A Book and a Chat with John-Manuel Andriote

You can find out more about my guest and their books at:
"John-Manuel Andriote - Victory Deferred"