A Book and a Chat with Jodi Foster 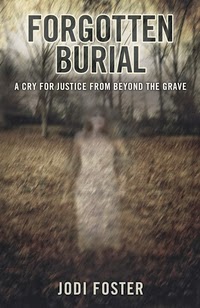 When I have a show and the guest does not turn up, I normally try to chat about them and their book not only so people get a little information about them, but also in case they have been delayed and might join the show all be it late.

Today was one of those shows, as after a few minutes my guest Jodi Foster was able to join me for yet another interesting and entertaining, “A Book and a Chat” actually it was show 699 with the 700th show being this Saturday at 11:00AM ET.

Jodi is an intuitive empath, author and Tv personality, her story having appeared on SyFy’s Paranormal Witness in a story called “The Apartment”. Now it is available for all to share in her debut book “Forgotten Burial: A Cry for Justice from Beyond the Grave”. In which Jodi tells the true paranormal story unraveling the mystery behind the unsolved case of a missing young woman, Madeline Isabella Johnson.

Old enough to be fading from local memory, the news of a kidnapping, torture, and sex-slavery story, dubbed The Girl in the Box, grabbed national headlines during much of 1984. Red Bluff couple Cameron and Janice Hooker held a young girl, Colleen Stan, captive in their home for seven years. Author Jodi Foster had never heard of the case when she moved to Chico in 1999. But that was before she met Marliz, before she found herself in the unknown darker underbelly of this already dark public story. Overlooked by the papers, Marliz’ story was a shocker. She had been the Hooker’s first victim, seven years earlier.

Shortly after moving into her apartment, Foster began to feel the presence of an unknown entity. Her young daughter had seen an angel following her mother around from room to room. Foster is soon plagued with haunting nightmares of abduction, murder, and a secret burial. Doors open and slam shut on their own. Appliances turn on and off, and a Sing 'N Snore Ernie doll wakes at 3:37 every morning to taunt her. Marliz had finally found someone who might hear her story and tell it to the world.

A story of inhumanity and stolen innocence is not easy to tell, nor to hear. In Foster, Marliz has chosen a worthy messenger. The story is both extremely disturbing and, ultimately, uplifting, as we follow the author’s journey through terror to understanding and right action.

Jodi’s story is reality-bending adventure as she works with police to bring justice to this disturbing, yet ultimately uplifting story.

So listen now and share an interesting, and entertaining show as I chat with my special guest today on A Book and a Chat with Jodi Foster

You can find out more about my guest and their books at:
"Jodi Foster - Forgotten Burial"

Email ThisBlogThis!Share to TwitterShare to FacebookShare to Pinterest
Labels: Book and a Chat, Forgotten Burial: A Cry for Justice from Beyond the Grave, Jodi Foster, Madeline Isabella Johnson., Murder, paranormal, Paranormal Witness, The Apartment, true story