A Book and a Chat with Barbara Conelli 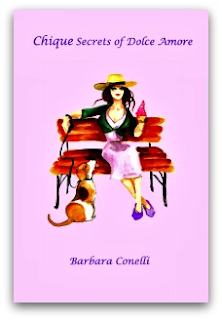 My guest today called in from Italy, which at this moment in time is in full swing with a national party after the Italian soccer team beat Germany in the semi-finals of the European Cup. As Barbara Conelli my guest said the country has gone totally mad, they are like Spain who they now play in the finals “soccer mad” The streets are full of people cars are driving around sounding their horns as Barbra well knows that no shops or even post offices will be open in the morning after tonight’s celebrations.

Barbra for those who can remember her previous visit to the show was a bestselling author at the age of four when her book she’d written became a big hit in local kindergartens. She turned into an overnight success that lasted for twelve exciting hours. Since then, she has never separated from her writing endeavors. Barb writes even in her sleep and she can often be seen sitting on her bed at three a.m. with a flashlight frantically processing her somnambulant ideas.

A born nomad and adventurer, she’s been there, she’s done it, and she’s not afraid to write about it.

Her travel books have become a huge hit sharing her love for all things Italian with the secrets and interest that will keep the reader turning the page.

About “Chique Secrets of Dolce Amore”: (taken from Amazon)

Fascinating, enthralling and seductive travel and life tales about unexpected encounters with the capricious, unpredictable and extravagant city of Milan, its glamorous feminine secrets, the everyday magic of its dreamy streets, the passionate romance of its elegant hideaways, and the sweet Italian art of delightfully falling in love with your life wherever you go.

Now Barbara is back in Italy, at the moment in Rome where she is not only blogging about her travels, but also bringing together the details for her next book, this will then be followed by a spell in Venice preparing book four in the “narrative travel nonfiction” or rather travel stories range. A further trip to Sicily will I’m sure always divulge that countries secrets that will help become yet another bestselling book.

So listen now and share an interesting, and entertaining show as I chat with my special guest today on A Book and a Chat with Barbara Conelli

You can find out more about my guest and their books at:
"Barbara Conelli - Chique Secrets of Dolce Amore"