A Book and a Chat with Diane Doniol-Valcroze 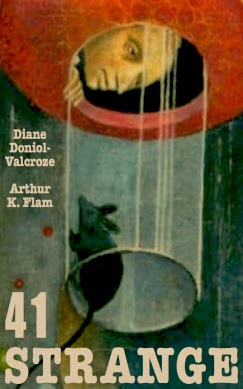 When your father is Jacques Doniol-Valcroze, co-founder of the New Wave magazine CAHIERS DU CINEMA, and from her grandfather, French filmmaker André Cayatte (original THE MIRROR HAS TWO FACES), it is not surprising that Diane Doniol-Valcroze as a young girl, she developed a passion for writing.

Born in Paris, France, Diane e earned a B.A. in English literature from the Sorbonne University, and an M.F.A. in film from New York University while apprenticing on the Lauren Hutton show. It was while at New York University she met Arthur K. Flam and together they have co-written screen plays for such films as Lionsgate's PENNY DREADFUL, starring Mimi Rogers, and MGM's HIT AND RUN, helmed by Enda McCallion and starring Kevin Corrigan.

Now the two of them have produced their debut book 41 STRANGE.

41 STRANGE, a first-of-its-kind e-book anthology devoted exclusively to “short-short stories of the strange and horrifying,” awaits just a couple of clicks away for Kindle readers who enjoy a good shiver up their spines. The book delivers a reading experience in the spirit of such masters of the macabre as Edgar Allan Poe, Ray Bradbury, Stephen King, Alfred Hitchcock, and Rod Serling.  Many of the stories were written “in the lonely hour of the wolf … in the pre-dawn darkness when you get those ‘waking nightmares.’” .

With a second book already underway, we will I am sure hear a lot more from these talented authors.

You can find out more about my guest and their books at:

Thank you so much for having me on your wonderful show, Barry. Was a pleasure.