A Book and a Chat Jen Malone 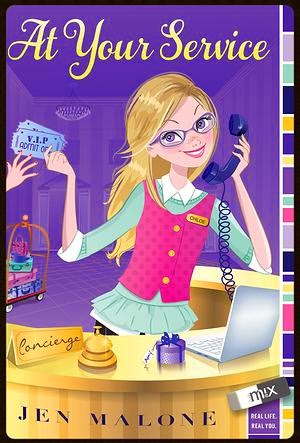 As always its great fun to have a debut author on the show, and while right now this debut novel for Jen Malone, she already had a series and YA book already planned to come out over the next two years.
Jen Malone writes books for tweens and teens.

Her debut novel “At Your Service” published in August 2014 with Simon & Schuster/Aladdin M!X. Next up is a new series, co-authored with Gail Nall called RSVP(also with Simon & Schuster), followed by a young adult novel, Wanderlost with HarperCollins. Jen lives outside Boston with her family and teaches at Boston University. She loves school visits, getting mail, and hedgehogs.

Well that is what he short profile states, in fact there is so much more to Jen, from traveling around the world, to the touch job of working as a publicist for 20th Century Fox.  Super tough work, she "had to" walk the red carpet alongside George Clooney, hang in a hotel room with a shirtless Mark Wahlberg (so what if his wife was there too) and sleep in Oprah's hotel room at The Four Seasons (she'd checked out early and, I mean, we'd already paid for the room, so...).

She even was told by a psychic that she would write a book with a purple cover and live in a big white house by the water. Imagine her surprise when she first laid eyes on the cover Simon & Schuster designed for AT YOUR SERVICE… Now she is waiting for the big white house.

About “At Your Service”

Chloe Turner has pretty much the BEST life. She gets to live in the super fancy Hotel St. Michele, New York City is her home town and her dad Mitchell Turner, concierge extraordinaire, is teaching her all the secrets of the business so she can follow in his footsteps. After helping him out with a particularly difficult kid client, Chloe is appointed the official junior concierge tending to the hotel’s smallest, though sometimes most demanding, guests.

Her new position comes with tons of perks like cupcake parties, backstage passes to concerts, and even private fittings with the hippest clothing designers. But Chloe hasn’t faced her toughest challenge yet. When three young royals, (including a real-life PRINCE!) come to stay, Chloe’s determined to prove once and for all just how good she is at her job. But the trip is a disaster, especially when the youngest disappears. Now it’s up to Chloe to save the day. Can she find the missing princess before it becomes international news?

You can find out more about my guest and their books at:
"Jen Malone - At Your Service"