A Book and a Chat with Elizabeth Romero 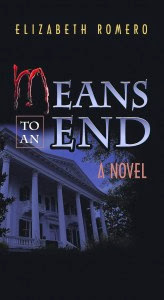 Elizabeth Romero when younger often found herself lost in books that would just whisk her away to strange sounding places with strange sounding names. Her own younger life though had no such happy ending as she’d used to read about, married at a young age only to find herself four years later divorced with two young children to look after.

After a career in real estate she started her first novel which had been put on the back burner for several years. The result is not only her debut book, but the first in a series that has already received several great reviews.

“Means To  An End”, is the first in Elizabeths “Redemption” series a thriller with a touch of romance set around New Orleans, an area that the author knows well having lived most of her life in the bayou country.

About “Means to an End”: (taken from authors web site)

This fast-moving story starts out in the mountains of North Carolina and quickly moves on to exciting New Orleans. Ashby Devereaux is a young woman who spends the first seventeen years of her life in an abusive home. While running from a murder , she finds love in the arms of my dashing hero, a Judge from New Orleans. Will he love and protect her or be her undoing? The real story unfolds amidst adventure, romance and an interesting group of supporting characters.

When Marie Broudreaux, the beloved daughter of wealthy and prideful Louisiana Cajuns finds herself disgraced, pregnant with twins and abandoned by her family, she is forced to save the family name by becoming the wife of Garrett Devereaux, who unbeknown to her father is a cruel and abusive man. Both twins, Ashby and Danny along with their now drug addicted mother struggle to survive in the backwards mountains of North Carolina. Abused at home, taunted and bullied by class mates Ashby still finds young love with the most  popular boy in school. Will she travel down the same road as her mother? Watch the transformation as the circumstances of Ashby’s life turns a once timid girl into a survivor regardless of the cost. Escape to a better life for Ashby seems impossible as long as Garrett is alive….

Alone and running from the authorities Ashby assumes a new identity and hides out in the New Orleans of her mother’s stories while searching for her runaway twin. Secreting herself amongst a group of interesting characters and with the law nipping at her heels Ashby unwittingly catches the attention of a local Judge but will he still love her when he finds out the truth or will he turn her in? Has that been his plan all along? In this story you will meet a unique character you will not soon forget!

As one reviewer wrote…

This novel weaves the Southern literature and location of the novel into your hearts as you read. It takes the reader on a journey of haunts, heartbreak, and romance. It brings the reader into a nonstop read -hard to put down. Can't wait for the second book!

As we heard during the show, the second book “The Watched’, a psychological thriller is already in the works.So listen now and share an interesting, and entertaining show as I chat with my special guest today on A Book and a Chat with Elizabeth Romero

You can find out more about my guest and their books at:
"Elizabeth Romero - Means To An End"